You can begin your visit to Taormina by passing through the Porta Messina and walking along Corso Umberto, the town’s most fashionable street, with its many designer boutiques, bars, restaurants, typical nightspots, craft shops, churches, monuments, and terraces with panoramic views. Corso Umberto runs the whole length of the town, connecting the two gates which were originally the two means of entry to the centre. The beginning of the Corso is about 300 metres from the Hotel Sirius. As you walk through Porta Messina, on the right is the Palazzo Corvaja, a C15 building which now houses the “Museum of Sicilian Art and Tradition: Panarello Collection”.

Opposite the entrance to Palazzo Corvaja is a Hellenistic temple, now forming part of the Church of Santa Caterina. Behind the church stands the Odeon, a classical Greek theatre in miniature, designed to accommodate up to 200 spectators. The structure was used for staging theatrical events inside the main town. 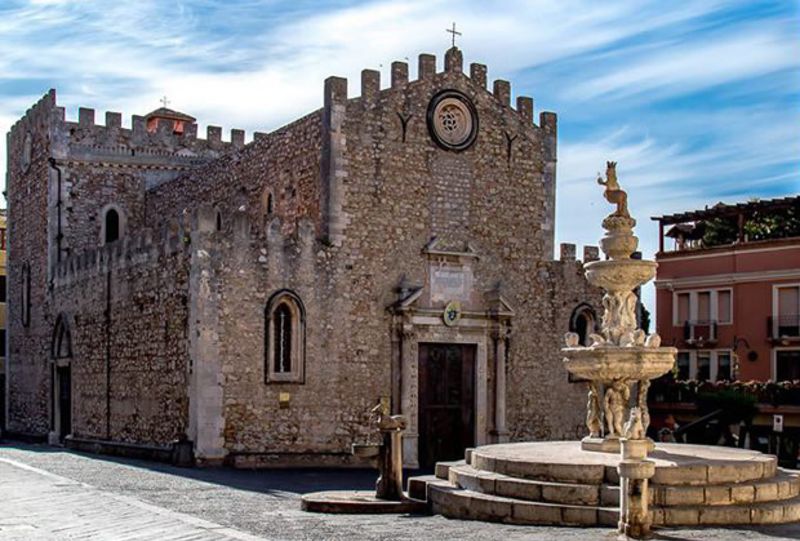 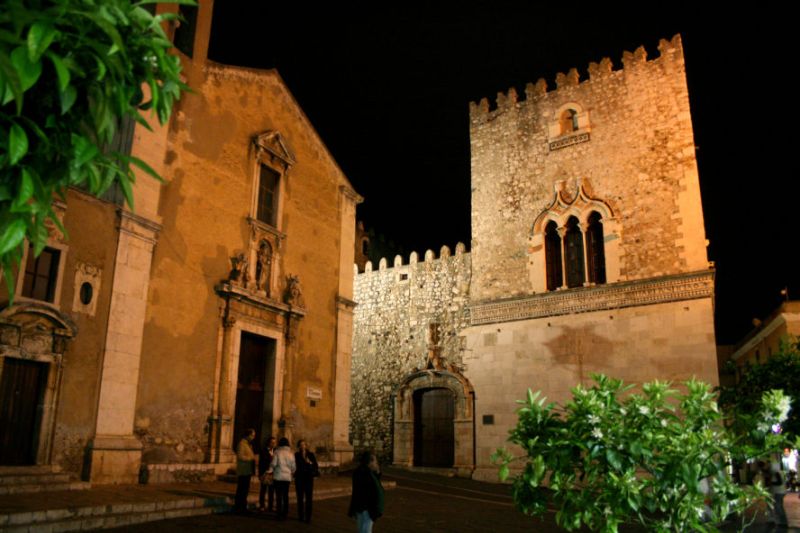 Facing the Church is Via Teatro Greco, which takes you up to the GRECO-ROMAN THEATRE, the largest classical amphitheatre in Sicily (open daily from 9.00 to an hour before sunset). Nowadays it hosts all the cultural events taking place in Taormina during the summer months: from the Film Fest to a variety of theatrical and musical events. Next to the theatre, you can visit a small ANTIQUARIUM, which houses a collection of archaeological finds from various sites.

If you continue along Corso Umberto, you arrive at Piazza IX Aprile from where you can enjoy magnificent views of the sea and coastline below Taormina and the sight of Etna rising majestically in the distance. In the square is the ex-Church of Sant’Agostino: constructed in 1486, it is now used as the Municipal Library. On the opposite side of the square, at the top of some beautiful steps with a balustrade, stands the Church of San Giuseppe, built during the second half of the C17. 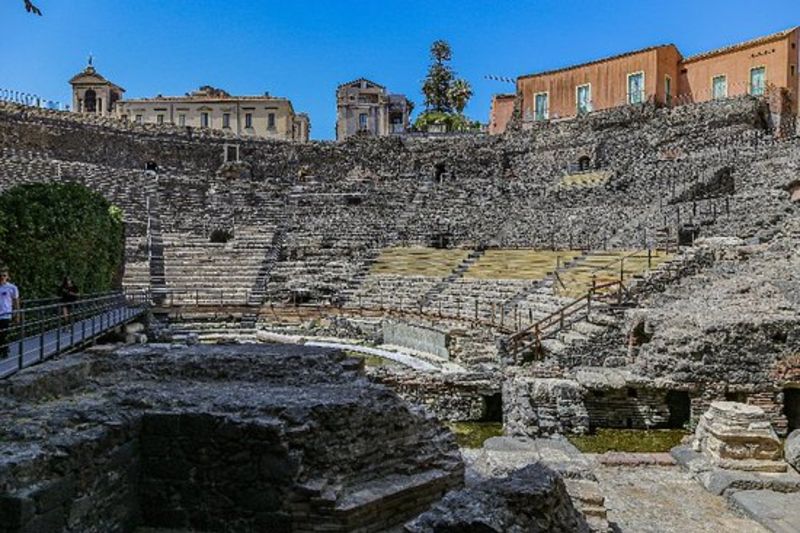 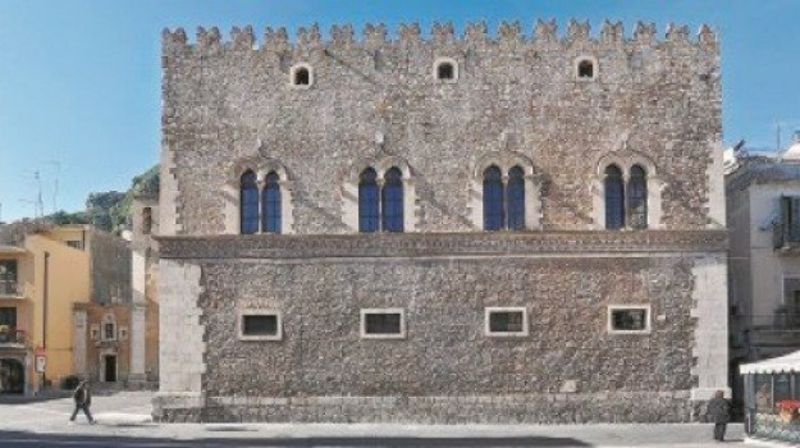 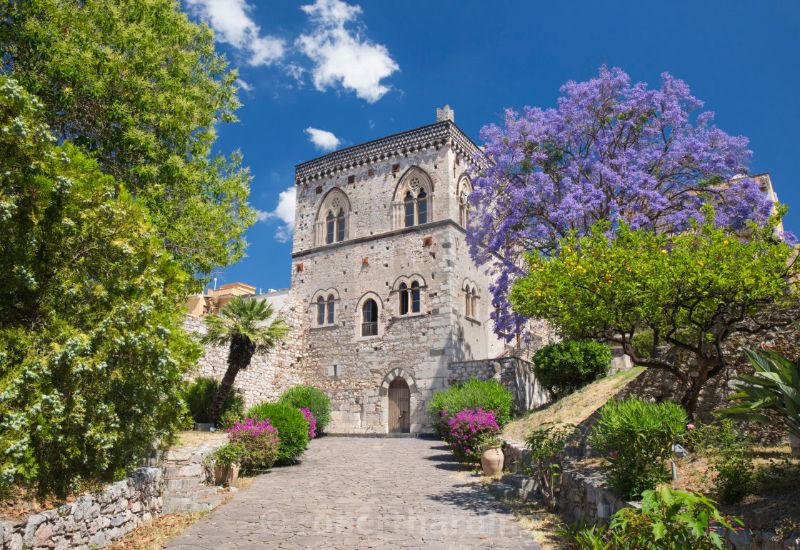 On the left hand side of this church stands the TORRE DELL’OROLOGIO (Clock Tower), constructed in the C12. The Tower acted as a gateway on the Corso Umberto, originally used to close off part of the HISTORIC TOWN. Once through the Tower gateway, and continuing along Corso Umberto, you will see on the right the entrance to Otto Geleng’s house, and a flight on steps leading up to the C17 Church of the “Varò” (Launch) or the Visitation. Behind the church lies a crypt of much earlier date.

Continuing down the Corso, you come to the Palazzo Ciampoli, a handsome mansion at the top of a wide flight of steps. Further on, you arrive in the Piazza Duomo, where you can see the C15 Cathedral dedicated to San Nicolò di Bari, and the picturesque Fontana del Tauro (Fountain of the Bull). Opposite the square, stands the Palazzo Municipale (Town Hall), while a little further up the Corso you can see the C14 Badia Vecchia (Old Abbey). Descending a flight of steps from the Piazza Duomo, you come to the ex-Convent of San Domenico, built in the C14 and now the home of the San Domenico Palace Hotel. Returning along Corso Umberto, you finally arrive at PORTA CATANIA, the other gateway leading into the town. Next to this stands the Palazzo Duca di Santo Stefano, an imposing ducal palace dating back to the C12. At the end of the Corso, you can enjoy another spectacular panorama, with views of Etna and the whole Bay of Giardini Naxos. 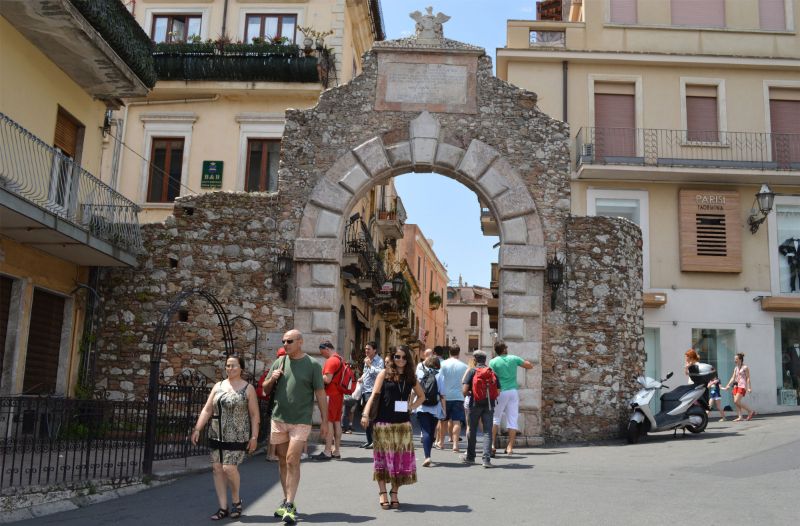 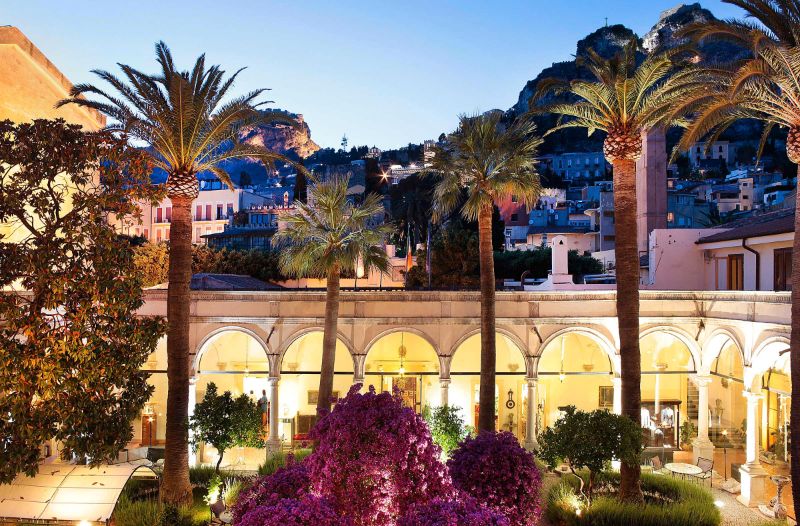 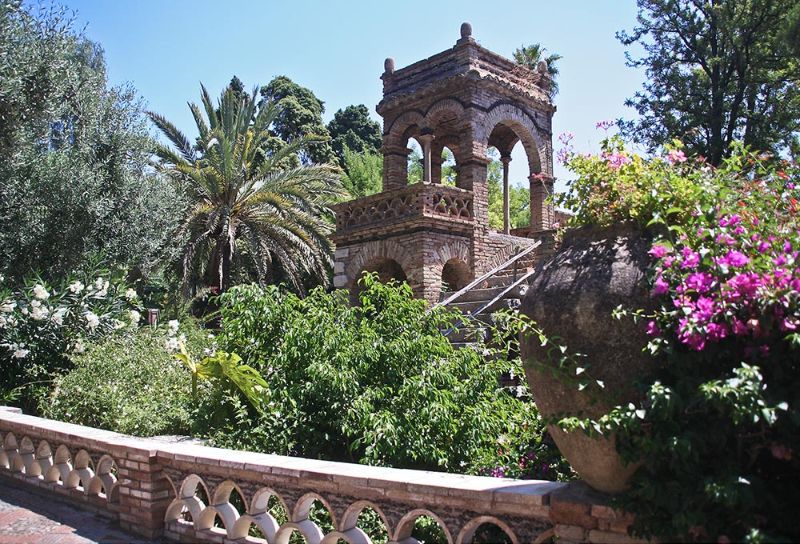 The visit continues with an exploration of the various sights which lie away from the main thoroughfare: the attractive gardens of the Villa Comunale, the Church of San Pietro with its neighbouring catacombs, the Church of San Pancrazio, the ex- Convent of Santa Maria Del Gesù, and the Santuario della Madonna Della Rocca (Sanctuary of the Madonna of the Rock). From here, a flight of steps leads you to the remains of the Castello Medievale (Mediaeval Castle). It is also well worth visiting the mediaeval village of CASTELMOLA, among the many attractive spots and incredible viewpoints to be explored around Taormina.